By Philippe Mottaz - The Geneva Observer

You have to look at Mark Henley’s photographs if you want to comprehend a complex circular construct such as International Geneva. Henley is the surveyor of its territory, which radiates from a “Palais” at its core and, through a succession of concentric circles, ends with the most dispossessed and disenfranchised people of the world at its outer limits. Before reading on, you may want to take a look at his images and let them work their power on you.

You will see vast and palatial rooms where the convulsions of the world are discussed in hushed tones and coded language while people keep dying in foreign lands. Your eyes drawn to a child’s face might trouble you as you realize that that this asylum-seeking child is actually staring at you. Browse further and see the power of technology keeping the bond between people separated by wars or conflicts rendered in a burst of colors usually absent from our dour urban landscape. 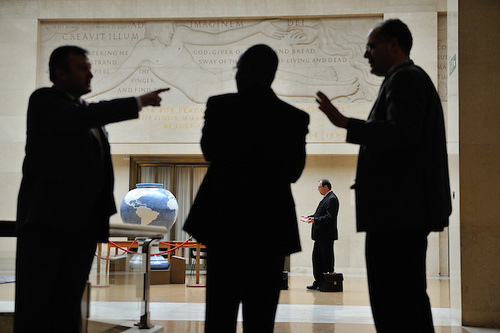 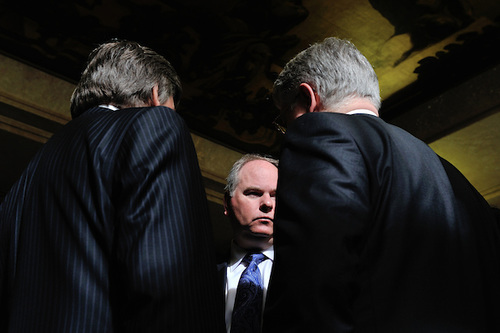 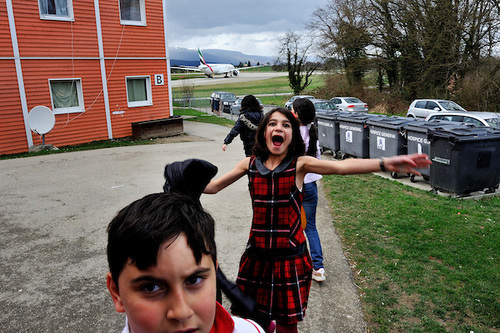 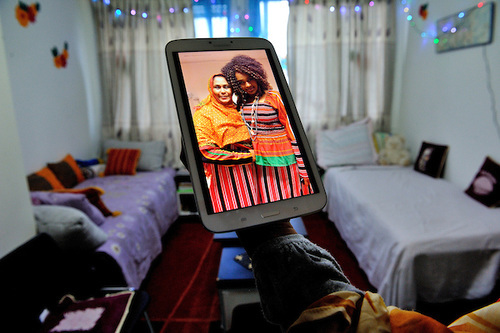 Armed with his Nikon, Henley was there when they did recently—revolted, upset, and united in marching against systemic racism. At the height of the Covid-19 crisis, an image shows crude Chinese propaganda responses to American tweets. His photo of Dr Tedros, bowed head in hands in WHO’s executive boardroom on Avenue Appia, is a fitting gauge of the gravity of the unfolding global drama. It’s an introverted, sometimes uninspiring town, which occasionally finds itself at the epicenter of deep global tremors.

Based at the Palais, the 55-year-old British-born photographer cuts a familiar figure in International Geneva. First arriving in 1999, he has won the Swiss Photographer of the Year award twice and is sometimes mistaken for an UN official photographer by his diplomatic subjects. “No, I am press,” he tells them, a welcome statement of independence when spinmeisters vastly outnumber journalists.

The confusion might also arise from the fact that, as a news photographer told him once, “You start shooting when we stop.” “Stage photo opportunities don’t provide me with what I want. The guy standing on the podium or the head talking into a microphone don’t interest me as a documentary photographer,” Henley tells me during our conversation at the Geneva Observer’s office.

After studying literature, Henley “escaped Thatcher’s Britain as she was going for a third round at 10 Downing Street.” He went to Asia and “never quite made it back.” He was Tokyo-based between 1989 and 1995, before spending two years in Hong Kong, which he used as a base for extensively traveling across China.

“When I finally arrived here, I had been on the road for a good ten years, looking at globalization and at the consequences of the decisions made on high and that got me more and more interested in these people who control things and have global influence, like the financial community. In Zurich, I started a project around the banks, as a subject in itself. It was largely a blind spot. Someone told me I covered the bankers like an anthropologist a remote tribe. I approached the UN and International Geneva in the same way.” 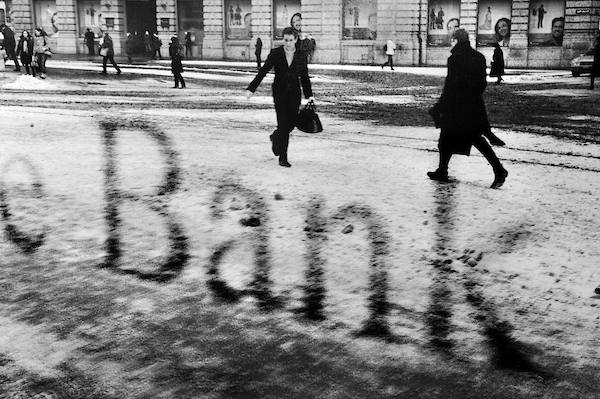 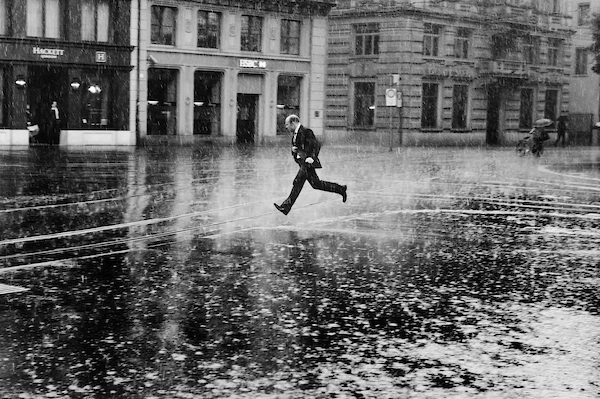 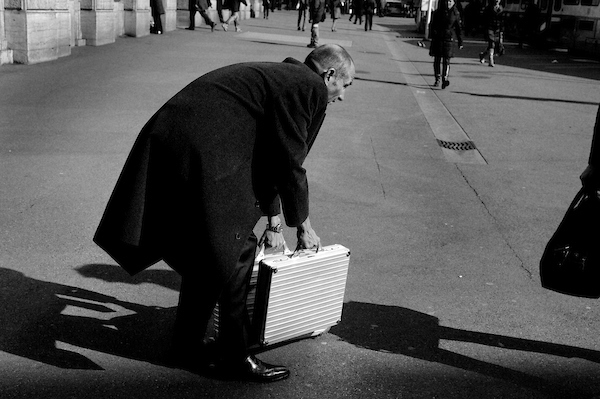 Henley dates his opening to the world back to his teenage years. “I come from a very small town in England and I got selected for an exchange student program. I ended up attending an elite high school in Washington, DC during the Reagan years. Some of my classmates’ parents were lawyers, lobbyists, people connected to the highest sphere of power. We were taught politics, history, and philosophy. It definitely changed my whole outlook on the world.”

Henley describes Zurich’s bankers and Geneva’s international public servants as “tribes”. “I mean, an African, a European and an Asian diplomat have much more in common between them than with the people on the street.”

Chance played a part in his discovery of what became one of his major projects: documenting the work of the Conference on Disarmament, the CD as it is unanimously referred to. “I had barely received my UN credentials and someone from the press office told me ‘come with me and take a look at this’ and I was taken to the Disarmament Conference room. I had never been inside, I didn’t even know it existed.”

Henley decided to concentrate his work on the conference. “As an older photographer, I find it intellectually very interesting to photograph what isn’t really photographable in any real sense, to convey these structures of power. It’s very abstract. I am trying to find a way to talk about that visually and to develop a visual language for that.” 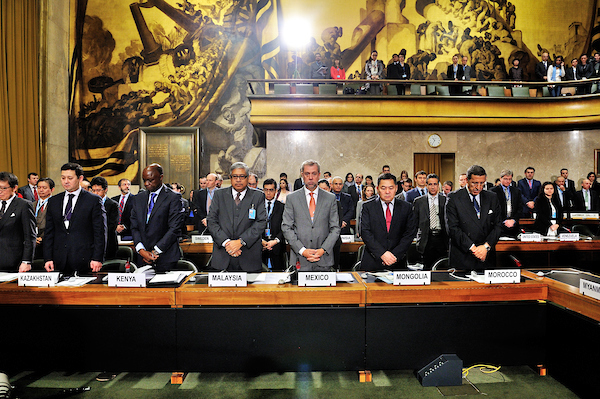 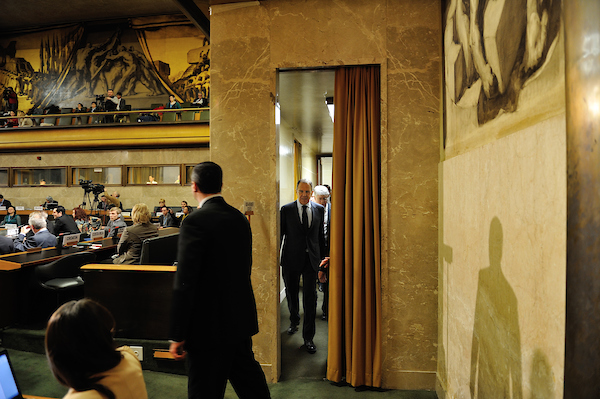 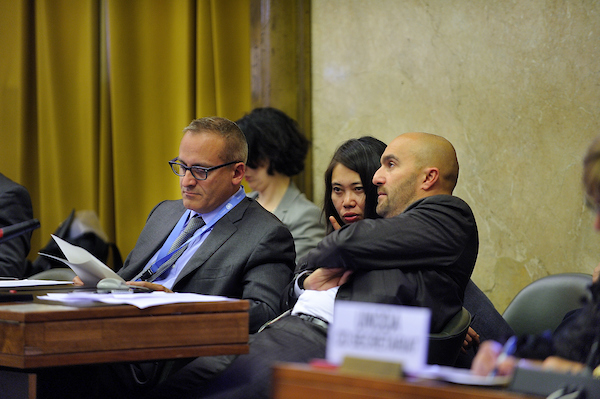 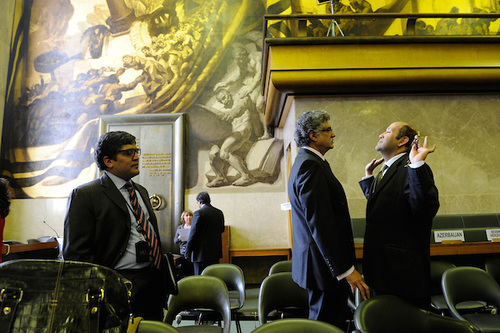 The CD proved to be the perfect setting. Created in 1979 by the UN General Assembly, a legacy of the Cold War, it hasn’t produced a significant resolution since 1996. It convenes in an historical meeting room. Among its 65 members are all the nuclear powers, including Israel, India, Pakistan and North Korea—countries that have not ratified the non-proliferation treaty.

“The CD is completely blocked, stuck in time, ‘figée’,” says Henley, “some might consider it the perfect illustration of the UN system’s failure. Yet this is the place where you can see, at the height of some potentially dangerous tensions, the ambassadors of the two Koreas shake hands at the end of a meeting, or where the Russian and the Ukranian representatives have forcefully stated their countries' enmity."

Does he mingle with the tribe? Henley, who hesitated about becoming a writer after university before opting for photography, quotes V., Thomas Pynchon’s early novel: “Approach and avoid.” “You want to go as close as you can, but without disturbing them, without being noticed. It’s a bit of dance. There is a fine line you don’t want to cross.” There is another more pragmatic reason not to cross this line he explains: Swiss laws are extremely restrictive about photographing without consent. “You can have your privileges revoked rather quickly.” The bulky Nikon suspended to his neck also works as a legal protection. “It says, look I’m taking a picture here, if you have a problem with that, let me know.”

The coronavirus crisis has massively disrupted the work of the UN, and its diplomacy in particular. “Without the face to face meetings, without the off events and things happening in the corridors, I am sure it has been really difficult,” remarks Henley. The literally minded Henley calls one of his latest series on physical distancing ‘Elbow Room’, another one has become ‘UN New Normal.’

Time and space are essential to his work. Today, like many of his colleagues covering the UN, Mark Henley fears the latter is being very seriously limited. While in the ‘80s his work was exhibited in ten cities, he was barred twice from China. “Access is getting more controlled at the UN. The press was kept at a distance when Xi Jinping came here two years ago. I have been following how the Chinese soft power is being pushed here. There is definitely a change. At the CD, a new generation of young Chinese diplomats has become much more confrontational. And now, covering the WHO and the controversy over China, I see that the two things are actually colliding.”

Now that he’s largely done identifying the tribes, documenting their customs and habitats, what will Mark Henley turn his attention to? “I think it’s time to try to make sense of it. A book, an exhibition maybe.” And how would he describe International Geneva? “A nice idea” he tells me. I press him to elaborate, he yields nothing. “Yes, a nice idea,” he repeats. I hear it as an encouragement rather than an indictment.